I’m told that if you want some­thing one should fix his mind to the thing and the knower will work to make that thing real­ity in your life. So when I started this site I might have made my request incom­plete. I started the site with the idea of get­ting some infor­ma­tion out into the universe.

Judg­ing by the num­ber of hits that some of the pages get on this site one might say that it worked. That infor­ma­tion was to get peo­ple to think about who they are, that the fear of our pub­lic ser­vants is not jus­ti­fied. But I still find myself still liv­ing in Oz! In case you didn’t know the lion in the wiz­ard rep­re­sents the peo­ple of the United States. Man, did he pick the right descrip­tion! The peo­ple in Amer­ica must keep light on at all times, lest they see their shad­ows. OK, with all the stuff ( and I pre­fer the other “S” word). At one time I thought the site was count­ing bots, how­ever, after check­ing the set­ting, I see that is not pos­si­ble. Which means that peo­ple come and read the sto­ries and leave with­out a thought in their head. I would even assume they go back to their face­book page for their daily con­sump­tion of ads. This idea worked fine for me when the site was new and it was not get­ting many hits, that idea is now out the win­dow of rea­son. I look at all the thing that we believe and struc­ture our lives by such as

In sci­ence, Ein­stien bullsh-​ting us with Grav­ity is not a force. Which was a petty easy one to pull off because no one ever told us what it was includ­ing New­ton, how­ever, at least had the forth­right­ness to tell us he didn’t know!

In pol­i­tics, The two-​party sys­tem, a two-​party sys­tem that one might assume have two dif­fer­ent ideas on what’s best for the nation, but who, when in office come up with the same out­come. War and debase­ment of the cur­rency. And scene we are on the subject…

Finance, the most out­ra­geous one of all! A sys­tem that has brought us all (so-​called) whites included from the old Mis­sippi to the new Mis­sippi! The only dif­fer­ence is the (so-​called) white are now enslaved also. If you don’t know what I’m talk­ing about go back and lis­ten to or read Money vs Cur­rency (front page in the for­got­ten post) I’m not going to leave a link because if you are inter­ested in why you and I are slaves, then you will find it on your own! Do I sound pissed? Hmm, could be! I’m petty sure is you give me one or more activ­i­ties in life, I got the horses to pull it back to your being used or out­right enslaved. But I won’t go there unless pushed.

Now, although I believe what I’m say­ing, You must this is just a bit of self-​therapy which is nor­mally pro­formed by a ther­a­pist or is it the-​rapist? That’s Eng­lish for you, as you can see in some of the Wise Word say­ing on this site there is a bit more going on in the Eng­lish lan­guish than communication.

I used to have a script run­ning where the pub­lic could add com­ments but it got to the point where all I was read­ing was ads. I fell that if I’m pay­ing for the site and there are no ads (track­ing or oth­er­wise) then no one who just hap­pens by should be able to place ads on the site also. I later thought “Maybe I’m hold­ing some­thing back that I should not, so now mem­bers can run all the ads they like, but only on their own pro­file. This way no one is forced to view them and have to be invited to see them.

Why peo­ple believe that you must have a hugh name to have any qual­ity is beyond me, but that is (IMO) very true. What has hap­pened is that the peo­ple have been herded to the major sites. How is this done? When I started doing web­sites (or I should say this web­site) there was a script that encour­aged the use of per­sonal sites this was done by the pro­gram called Web-​rings which grouped site together (this was before Google) I admit that the search engines were not as good as Google, but what can you expect they were not funded by D.A.R.P.A. (For sixty years, DARPA has held to a sin­gu­lar and endur­ing mis­sion: to make piv­otal invest­ments in break­through tech­nolo­gies for national secu­rity.) And it’s in the national secu­rity inter­est that you know as lit­tle as pos­si­ble. So all inter­net traf­fic was routed via google (to com­pa­nies or major media sites) and because it was the best search engine our money could buy we used it. And it made up rules it to hin­der those pri­vate sites where all, or at least most of the infor­ma­tion (on the three sub­jects I talk about above) resided.

Then to really put the nail in the coffins of the reader, we got Youtube, This was great now you didn’t even have to read, just sit back and veg-​out on videos. They made it so easy for us to be igno­rant, and we loved it (myself included)!

I think I have dug a deep enough hole for myself and I’m just about ready to jump in, or as some say “give up the ghost.” in the case of this site that I have been pay­ing for, every year for the last 11 or 12 years. Not count­ing the 3 years before I paid for a domain name. I started think­ing this right after I paid for this year, so I got a year to come to a con­clu­sion. I have made up my mind that I will not make the deci­sion, I’ll let the par­tic­i­pa­tion make the deci­sion for me. I think that’s a sure way to know if after all this time if it has been a money pit! Right now I’m hear­ing Bruse tell me 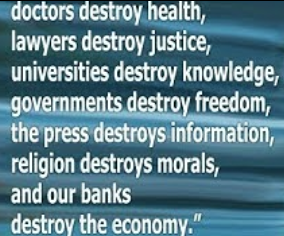