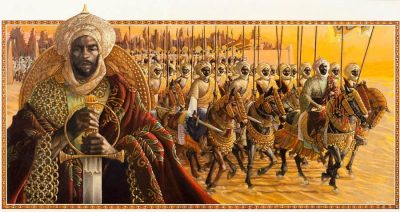 Today marks the anniver­sary of the end of nearly 700 years of African Mus­lim rule over Spain, Por­tu­gal and South­ern France.

Four hun­dred and eight years ago on the 8 of April King Phillip III of Spain signed an order, which was one of the ear­li­est exam­ples of eth­nic cleans­ing. At the height of the Span­ish inqui­si­tion, King Phillip III ordered the expul­sion of 300,000 Mus­lim Moriscos, which ini­ti­ated one of the most bru­tal and tragic episodes in the his­tory of Spain.

Con­trary to con­ven­tional wis­dom, it was ancient Africans that brought civ­i­liza­tion to Spain and large parts of Europe and not the other way around.

The first civ­i­liza­tion of Europe was estab­lished on the Greek island of Crete in 1700 BC and the Greeks were pri­mar­ily civ­i­lized by the Black Africans of the Nile Val­ley. The Greeks then passed on this acquired cul­ture to the Romans who ulti­mately lost it; thus, ini­ti­at­ing the Dark Ages that lasted for five cen­turies. Civ­i­liza­tion was once again rein­tro­duced to Europe when another group of Black Africans, The Moors, brought the Dark Ages to an end.

We have 80 guests and no mem­bers online