I started Genet­icMem­ory in 2001 because I didn’t know what was going on but I said that I’m just going to start record­ing things (or remem­ber­ing things) so that at some time in the future it might all come together. That’s also why the site is free and why there are no user accounts. It’s free because no one who has lit­tle to no funds sould be hand­i­caped by a lack of access to mem­o­ries (The Past). There are no user because I learned that when I have user the site goes down and there is always some infor­ma­tion that turns up miss­ing. I never thought that I had any infor­ma­tion that some­one else didn’t have, I was just doc­u­ment­ing those flee­ing bits of infor­ma­tion needed to put the puz­zle together (here today gone tomor­row.) there is a lot of that going on. A friend ask me about the flat earth and I told him that I didn’t know. Then I ask him if it is what dif­fer­ence does it make? So you can see that I’m still learn­ing. I know now it makes a dif­fer­ence on how you look at the world. And, I have always said don’t throw out the Bible! Because it is “Basic.Instructions.Before.Leaving.Earth!” This life is a test. But what is being tested?

I watched one of Nicholson’s videos and there were so many things in the video that I have been doc­u­ment­ing for years that it was hard for me to tear myself away. I have posted one of my videos in the Twi­light Stu­dio sec­tion (right side of the home page) it is from a song from my younger years it’s called Mean Mechine by the last poets and as inter­est­ing as it was then there was no way that most (myself included) could under­stand all that was being said, well we are now com­ing into the times when it can be under­stood. It was done in the late ’60 or ’70 and I uploaded my ver­sion in 2008. I’m in my six­ties now and what I did is old hat, Nichol­son has taken this to the next level (there is more light now). I will be post­ing his videos in the stu­dio and most likely will con­tinue to do so for some time to come post other videos from him but it will be for those who don’t already know of them. His video’s are on You-​Tube and other plat­forms. How­ever, you can just go to his web­site and view the video’s there. One more thing when I went to the site and viewed a video it stopped on me, If that hap­pen to you just click the logo for the stream­ing site (bot­tom right) view the rest of the video then go back for more. If you are like me you’ll be there a long time. Here is a inter­view and a video for you now.

Web­mas­ters Note: The video was very well done, how­ever it seem that those who make these videos have abso­lutly no knowl­edge of his­tory before the for­ma­tion of the Bible, or how the Bible is a seclec­tion of books that pre-​dated the Bible (In other words most don’t have the full story as it is in so many things these days.) See Meat for strong men on this site for just a small amount of this infor­ma­tion. In the video the pre­sen­ter talk about a strong delu­sion to come. I would say it has hap­pen that it has been in effect for a long time already! Leave a com­ment if you have ques­tions (or state­ment) about this point. ANY­THING THAT CAN BE USED FOR GOOD CAN BE USED FOR EVIL.

DO YOU SEE WHAT I SEE?

As I have said before when youtube doesn’t want video’s freely dis­trib­uted they code it in another way so I have to down­load them to add them here.

Edi­tors note: This also make me won­der about all of the videos (some I have also even posted) about the New world order if they are not the oper­a­tion to keep us from think­ing about this!

One thing still holds true “You gotta know who you are!” 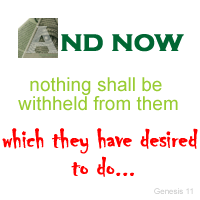