You will find when reading, listening, or viewing GeneticMemory and Twilight Studio you may see many references to the bible. And I know this can be a source of deep concern to many in the community. Who might believe that the bible has nothing to do with African history and way of life before slavery or that it's a book written for domination. Nothing could be farther from the truth. I know, that for some this can be hard to accept on face value. My intent is to give another portal on viewing the bible as a law-book and as the bible (Basic Instruction Before Leaving Earth). By the way it is also a study in/on psychology.

Here is how Dr.Ben Tells it!

The main reason that the bible is rejected by many is the fact that those in power in the church never tell you to read and understand Galatians 4 and more to the point, verses 22-24 In those verses it is clear that the stories in the bible are in the form of  allegories!

ALLEGORY:
1: the expression by means of symbolic fictional figures and actions of truths or generalizations about human existence; also : an instance (as in a story or painting) of such expression
2: a symbolic representation : emblem 2
Now the verses talk about one story in the bible and that is the story of Abraham and his two sons. This is one of the most important stories in the bible , and is the seed story for many if not all the stories that follow. I am by no means an expert on the subject but the statement is straight forward with respect to how the story should be viewed. If you keep in mind that this is the lineage of Jesus, then following the logic then Jesus must be part of the allegory! So don't throw out the bible learn to use it for what it was made for to get justice and/or peace. What I said would be easier to take, if you consider that it's not a history of any one people, And that it is parts of the mystery system ways of thinking. As related by G.M. James work Stolen legacy (Which was in Pirated Signal) What Dr. Ben dose not go deep into is where did the bible that we have today come from? It's a Roman invention using the text of the day. That some people called Jewish, but was not. this was known around the world before anyone ever heard the word Jew or Jewish. This has implication for who and what is called a Jew because they subscribe to the story in order to get the benefit!.
In other words the stories subjects are twisted for a benefit. At this time we have three religions milking this for all they can get. In this documentation the "Mystery System" is called pagan.
Like all other initiative teaching, Egypt held that man's purpose on earth was the return to the source. There were recognized in Egypt two roads to this same goal. The one was the way of Osiris, who represented the cyclic nature of universal process; this was the way of successive reincarnations. The second road was the way of Horus, the direct path to resurrection that the individual might achieve within a single lifetime. It is the Horian way that is the basis of the Christian revelation and, according to Schwaller de Lubicz, the aim of Christianity was to make this direct path available to all who chose to embark upon it, rather than to a small group of select initiates who, in Egypt, comprised 'The Temple'. In this sense, and in this sense only, has there been 'evolution' in human affairs. Now when death is regarded not (as with us) as an ultimate dissolution, but rather as a transitional (and crucial) stage of a journey, then the apparent Egyptian preoccupation with death becomes exactly the opposite of what it seems to be. It is, in fact, a preoccupation with life in the deepest possible sense.
Keeping this in mind and  if you consider the source!  It's a bit easier to read between the lines and also redefine lines

Update: I noticed that I didn't add the text of the bible verses and that everyone might not have a bible on hand, and therefor may use an online bible source. If this is done it might cause for some confusion!

Here is the text from my source: Cyclopedic Indexed bible - Strong's expended Concordance

24:Which things are an allegory.

(the text goes on to explain how the allegory works.)

24 These things are being taken figuratively:

(in this version they are saying it just in the wording and how those words are interpreted.)

From Merriam Webster:Figurative *of words, language, etc. : used with a meaning that is different from the basic meaning and that expresses an idea in an interesting way by using

language that usually describes something else : not literal

Concider this also Psalm 78:2 "I will open my mouth in a parable (parable usually short fictitious story that illustrates a moral attitude or a religious principle) : I will utter dark sayings of old"

Psalm 78:3: "Which we have heard and known, and ours fathers have told us"

Those saying are from before anybody thought about writing a book on them! Casting Spells (because you have to spell to write!)

I personally have never read the full Bible. It is said that one has to pick ones pioson.

Seek and ye shell find, knock and it will be opened to you. 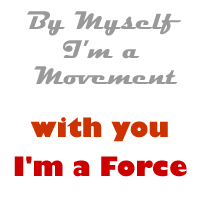